Pixelmon, a non-fungible token (NFT) project that raised over $70 million earlier this month, has recently revealed the artworks for which users paid up to $10,000…and the crypto community has been having a field day with them ever since.

While the definition of “art” is a highly subjective topic, the overall quality of Pixelmon 3D models left the crypto Twitter flummoxed nonetheless—but definitely not speechless. Users have been lampooning numerous “derpy” creatures since yesterday, pointing out the fact that initial pitch images have little in common with the final product.

According to DappRadar, the anonymous Pixelmon team promised users to create “the largest and highest quality game the NFT space has ever seen.” To this end, they launched a presale of NFTs, dubbed “Pixelmon – Generation 1,” which concluded on February 7.

Ultimately, 7,750 NFTs were sold via a Dutch auction—meaning their price dropped by 0.1 Ethereum (ETH) every 10 minutes—with a starting price set at 3 ETH (around $9,500 at the time). As a result, the Pixelmon team has raised around $70 million from crypto enthusiasts in total.

Disclaimer: I’m disgusted and sorry for the community that has been screwed over by @Pixelmon. This video is in your honor. #Shitzelmon #Pixelmon #NFTs #OpenSeaNFT pic.twitter.com/ZMUq46otz9

At press time, the floor price of Pixelmon NFTs has plummeted to 0.45 ETH (about $1,250) on NFT marketplace OpenSea—a far cry from their initial minting cost.

Commenting on the widely ridiculed art reveal today, the founder of Pixelmon, known only as “Syber,” acknowledged that his team “made a horrible mistake” and that he has let himself down.

“I’m not going to sugar coat it – we made a horrible mistake,” Syber wrote. “To put it simply, we are sorry. This is unacceptable. We felt pressured to push reveal and the reality is we weren’t ready to push the art work. This does not represent the brand and we will fix this as we have let many people down with this reveal.” 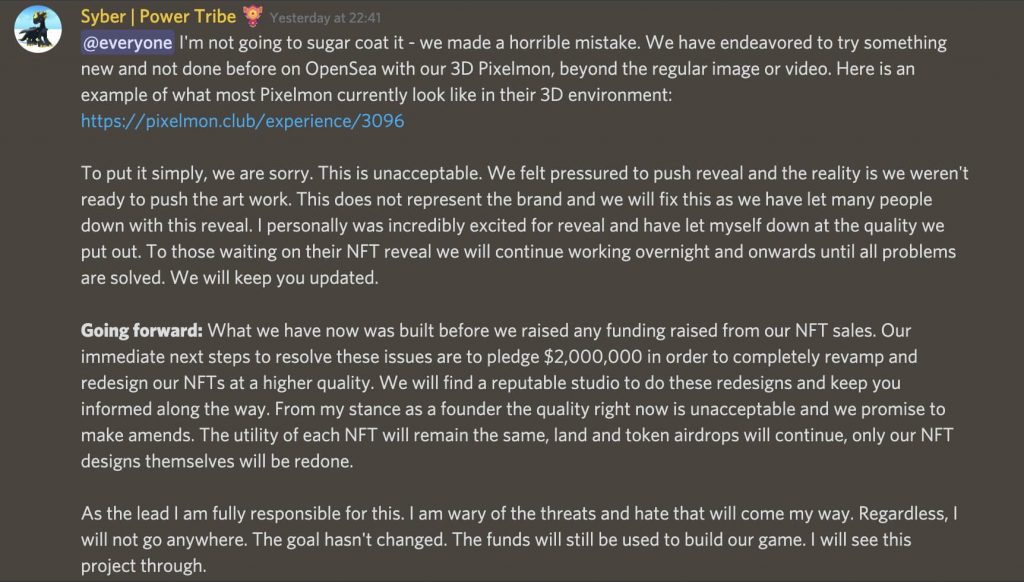 To “fix” the situation, however, Syber promised “to pledge $2,000,000 in order to completely revamp and redesign our NFTs at a higher quality” by hiring “a reputable studio to do these redesigns.” Needless to say, the community was not happy with this statement as well, quickly pointing out that it implied Pixelmon plans to spend only about 3% of the raised funds to fully revamp its project.

Meanwhile, the developers reportedly had no issues with spending the fund on personal NFT purchases lately. As one user noted in the project’s Discord channel, “Pixelmon use the fund buying bayc clone and azuki.”

“Market took a dip so our dev team wallet purchased a few nfts,” Syber replied with a smiling emoji.

Meanwhile, unhappy NFT buyers shouldn’t hold their breath in hopes of a refund since “that’s not how the space works,” according to “Jason,” another member of the Pixelmon core team.

“That’s not how the space works.”

“I’m sorry y’all got rugged on Pixelmon but I hope this teaches the space a valuable lesson on where to put money,” one of commenters inferred. “Undoxxed founders with no product being the last place in the world to put $70m.”

It’s really hard to argue with that indeed.

How to Tell if Gold Is Real: The Ultimate Guide