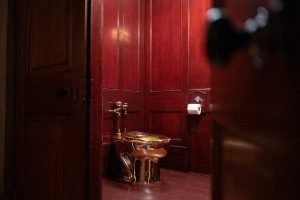 Although it may sound absurd, it is not. Blenheim Palace, UK, was robbed of a Golden Toile on the 14th of September 2019.

This is the story: Maurizo Cattellan, a renowned Italian artist, designed a 18 Karat Gold toilet that was fully functional.

He called it “America” when he created it, as he was attempting to sabotage modern society.

It was an original piece of art.

It was displayed in New York’s Guggenheim Museum.

This piece of art was surrounded by a lot of dram, but it eventually made its way to the UK at Blenheim Palace in 2019.

It was purged in a room that was accessible to the public. While you were doing this, a security guard was outside.

This luxurious Gold Toilet was a hit with many people.

It was then stolen in the early hours on the 14th of September.

Several people were interrogated and arrested during the investigation, but no one has been charged.

This Golden Toilet is worth more than PS4 pounds.

Who took it? And where is it now, anyway?

We don’t know who took it, and the instigation is ongoing.

It is most likely that it has been melted and returned to the open market.

But I think it was an Art Thief, who liked the idea of a Golden Toilet. Maybe it will one day be found in a little terraced hosue here in the UK.

It is my hope that everyone who took it got the Golden Toilet Roll! !