Crypto asset whales are individuals or entities who have large amounts of crypto. Their name comes from the giant ocean-swimming mammals. If a person has more than 1,000 Bitcoins and less than 2,500 BTC, they can be called a whale in the Bitcoin (BTC) case. It is difficult to identify who owns a Bitcoin wallet because Bitcoin addresses are pseudonymous. Although many people associate the term “whale”, with lucky early adopters, there are other types of whales. There are many types of whales:

Crypto exchanges are now some of the most powerful whales due to the large amounts of cryptos they have in their order books.

MicroStrategy, a software company, has purchased more than 130,000 BTC under the CEO Michael Saylor. Square and Tesla are also large buyers of Bitcoin. To increase their cash reserves, countries like El Salvador have also purchased large amounts of Bitcoin. Grayscale, a custodian of Bitcoins for large investors, is one example.

Many whales bought Bitcoin at a lower price than it is today in the early days. Cameron and Tyler Winklevoss were the founders of Gemini, a cryptocurrency exchange that bought over 78,000 BTC at $141 each coin. American venture capitalist Tim Draper purchased 29,656 BTC for $632 each at an auction by the US Marshals Service. Barry Silbert, CEO of Digital Currency Group, attended the auction and purchased 48,000 BTC.

Over 236,000 BTC are currently wrapped in the ERC-20 Wrapped bitcoin (wBTC). These wBTC have been specially stored with custodians who keep a 1:1 peg for Bitcoin.

When we speak about Crypto whales, it is important to discuss the mysterious inventor of Bitcoin. Satoshi may have more than one million BTC. Although there aren’t any wallets that contain 1 million BTC, on-chain data has shown that 63% of the first 1.8million BTC created were never used, making Satoshi a multi-billionaire. 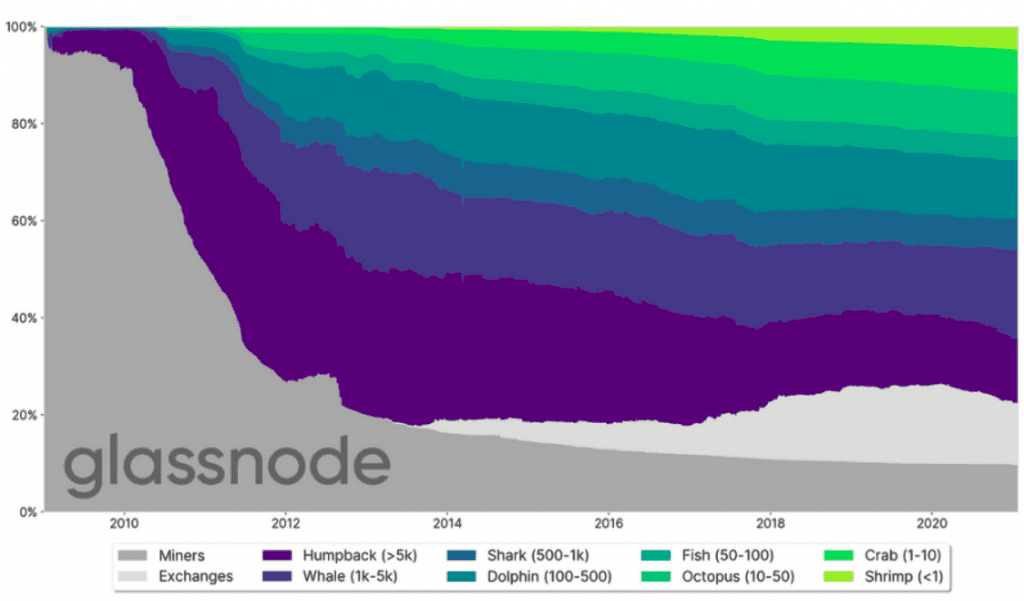 Figure 1: Over time, the estimated distribution of Bitcoin among network entities.

Critics of crypto ecosystem claim that whales have made this space more centralised than traditional financial markets. Bloomberg reported that only 2% of accounts had access to more than 95% Bitcoin. The world’s top 1 percent controls approximately 50% of global wealth. This means that Bitcoin wealth inequality is greater than in traditional financial systems. It also discredits the idea that Bitcoin could disrupt centralised hegemonies. It is possible that the centralization of the Bitcoin ecosystem may lead to the cryptocurrency marketplace being easy to manipulate. Glassnode’s experience shows that these numbers are exaggerated, and don’t take into account the nature addresses. Although there can be some degree of centralization, this may be an inherent characteristic of unfastened market. This could happen, especially since there are no market guidelines and some whales believe in Bitcoin more that the average retail investor.

The whale may place a large order to sell a lot of their Bitcoin. Whales place orders at a lower rate than other sellers. This causes volatility and a drop in the price of Bitcoin. This can be followed by panicked individuals selling their Bitcoins at a lower price. Once the whales place their huge sell orders, the BTC price will only stabilize. The value of Bitcoin is currently at the level that the whales require it to be in order to accumulate large amounts of coins at the desired price. This is known as a “sellwall”.

This tactic’s opposite is called a FOMO tactic, or fear-of-miss tactic. These are when whales place enormous buying pressure on the market, causing bidders to increase their bid prices to sell orders and fulfill their buy orders. This tactic is not easy and requires large amounts of capital. Sometimes, price movements can be predicted by watching whale selling and buying patterns. Whalemap is a website that tracks all metrics about whales. Twitter accounts such as Whale Alert are used to keep users up-to-date on whale movements around the globe.

64 of the 100 most popular addresses have not yet transferred or withdrawn bitcoin. This suggests that the largest whales may be the largest HODLers in this ecosystem. It is based apparently on the return on their investment. The chart below shows that whales can still be profitable. Based on a 30-day moving mean, whales have been profitable more than 70% of the time in the past decade. Your confidence in bitcoin drives the price action in many ways. Your confidence in the HODL strategy will increase if you are profitable over most of your investment period (monthly in this instance). Even though 2022 was one of the worst years for Bitcoin history, the balances on crypto exchanges are declining, which shows that many HODLers are buying Bitcoin. Experienced crypto investors avoid long-term Bitcoin investments on the exchanges. Instead, they use cold wallets to HODL.

Since the 2018 market cycle, Bitcoin has been carefully accompanying traditional investment assets. This trend has brought some consolation. Bitcoin can now be considered a peripheral asset and is being thought of in terms client sentiment. A 0.6 Pearson correlation to the S&P five hundred does not mean that it is a hedge against normal markets. This trend seems to be irritated by different consultants within the crypto scheme. This could be due to the wider macroeconomics. Capital inflows to the stock market have increased at an unprecedented pace over the last few years. The theory is that the stock market’s correlation could be broken in a prolonged bear or financial crisis.

However, a search of the on-chain records over 3 months shows that the number of whale wallets has been cut by almost 10%. There was however a significant increase in wallets, which ranged from 1 BTC up to 1,000 BTC. The whales are reportedly derisking their positions, and larger retail buyers are accumulating in turn, which is providing liquidity to the whales. The history suggests that every time this happens, there will be a brief-time dip in Bitcoin Price which allows whales to aggressively accumulate more. The whales can tell the market that Bitcoin’s fate is up to the buyer. The price and emotions can be affected locally. But, HODLERS will win the long-term, when all dust has settled.

Disclaimer: This report should not be considered as investment advice for potential investors. It does not consider the investor’s financial situation, investment goals or specific needs. When deciding whether an investment is right for them, all investors should take into account these factors and consult with a professional advisor. This report was prepared by the Company using information that it has access to, as well as information from public sources that have not been independently verified. The Company makes no representations or warranties, either express or implied, regarding the accuracy, reliability, correctness, completeness, reliability, or fairness of the information, opinions, or conclusions contained herein. This report is preliminary. The Company does not assume any obligation to revise or update the reports in response to new events or circumstances after the date of the report was made. Trading and Investments in cryptocurrencies viz. Bitcoin Cash, Ethereum, and Bitcoin Cash are just a few of the cryptocurrencies that you can trade & invest in. These are highly speculative investments and can be subject to market risk. The author’s analysis is intended to be used as information only and not as investment advice.

Did you miss our previous article…
https://www.goldcoastmoneyonline.com/germany-based-nuri-files-for-bankruptcy-coinflex-starts-restructuring-process/

KashKick Review. Is it Legit? A Safe Way to Earn Extra Cash?

How much can you earn to live in Alaska

How much can you earn to live in Alaska