El Salvador’s President Bukele made history at Bitcoin Miami 2021 when he revealed his plan to make El Salvador one of the first countries to adopt Bitcoin as legal currency. However, this year, “unforeseen circumstances” forced him to cancel his appearance.

In a letter to the attendees, President Bukele stated that he was in need of assistance in his homeland at this point and would not be able attend. This could be due to the recent rise in violence between gangs in the country.

Bitcoin Miami 2022 opens today, April 7, with the promise to be bigger and more successful than last year’s event.

Over 450 speakers will be speaking at this year’s “pilgrimage”, which is a four-day event.

Is this an attempt to destabilize Bitcoin with violence?

In his opening letter, President Bukele described the Bitcoin conference as a celebration for freedom, decentralization and ingenuity against ignorance and dogma.

He continued the theme by describing the struggle for cryptocurrency adoption in the same way that he described it as an “existential fight” that centers around the fight for freedom and money.

However, he is required to be present in El Salvador due to “unforeseen circumstances”. He signs off, implying that the circumstances were fate. 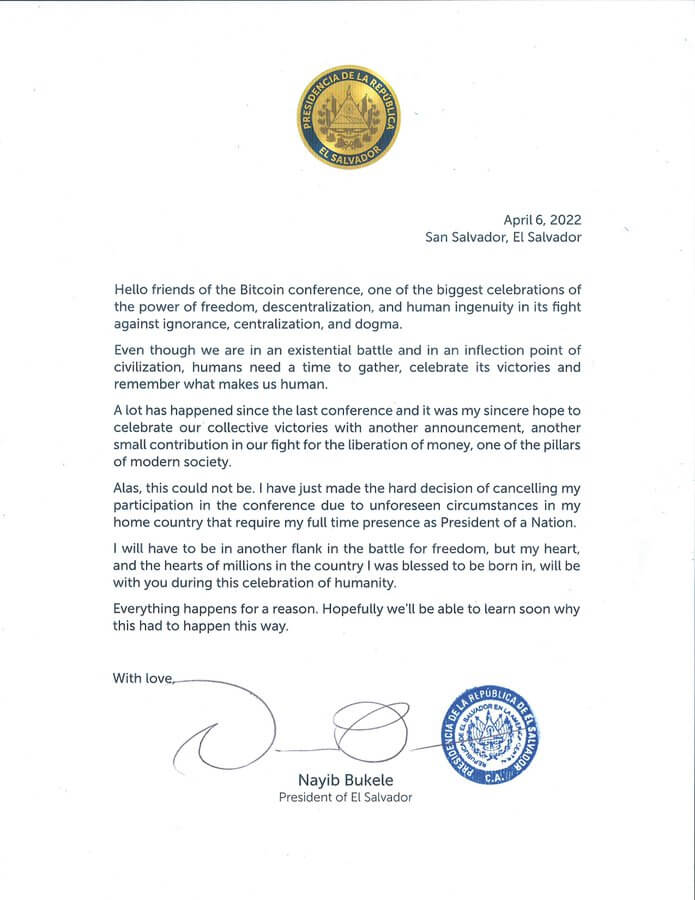 Max Keiser, a Bitcoin advocate, claimed that the IMF “banksters” were behind the violence in San Salvador’s streets during the weekend of March.

Keiser stated that this was a response to El Salvador’s use of Bitcoin to escape the financial terroristism imposed by the international banking cartel.

Sixty-two people were killed when gang members fired randomly at the public. This was the most violent act of violence the country has seen since January 1992, when it ended its civil war.

Bukele’s administration decided to suspend constitutional rights for 30 consecutive days starting March 27, in an effort to control the situation. These emergency measures include increasing the range of offenses that can be arrested, restricting public gatherings and enabling interception of communications.

Over 6,000 people have been arrested since then for being gang members. However, observers are concerned that people living and working in gang-dominated areas have been also arrested without discrimination.

Zaira Navas (Human Rights Group Cristosal) stated that the authoritarian response of gang violence has made innocent people unable or unwilling to present their case.

“The detainees have lost the right to defend themselves and don’t have the right of knowing the reasons behind their arrest.”

If banksters are responsible for the rise in gang violence, they have succeeded in creating chaos and setting in motion anti-government sentiment.

Top Money Saving Tips – How to Cut Out Unnecessary Items