OpenSea Vs. LooksRare (Comparison), The Bullish Case For $LooksToken

>OpenSea Vs. LooksRare – What is the future? Is it worth investing in Looks token?

Which is better and which should you use?

We will also be looking at the $LOOKS token as an investment option.

2021 was the year NFT began, and it feels like we’re just beginning. OpenSea, which is the most popular NFT marketplace right at this moment, was launched in 2017. OpenSea was launched in 2017 when the NFT market went mainstream. Its easy-to use interface, constant updates, and integrations with multiple blockchains made OpenSea a popular platform for buying/selling NFTs and launching them.

Stats for OpenSea vs. LooksRare as of January 28, 2022. Credits: Dune Analytics

It’s a token of appreciation and a community incentive

The most striking difference between OpenSea & LooksRare is $Looks token. $Looks, the native token of LooksRare platform, was first airdropped for OpenSea users. It is now being used to encourage users to buy/sell NFTs as well as to the liquidity provider and stakers.

The word is spreading quickly and users are flocking to LooksRare to buy/sell NFT’s. They are being rewarded with $Looks tokens for their efforts. This new platform is a lucrative one because it offers profit sharing.

According to their official help document:

All collections now offer trading rewards. There is no minimum volume – earn LOOKS each time you buy or sell an NFT from LooksRare. (Excludes private sales! )

Trading rewards will be distributed in WETH (Wrapped Ethereum), and $Looks token. A small amount of $Looks token could allow me to earn more than 0.5 Ethereum. 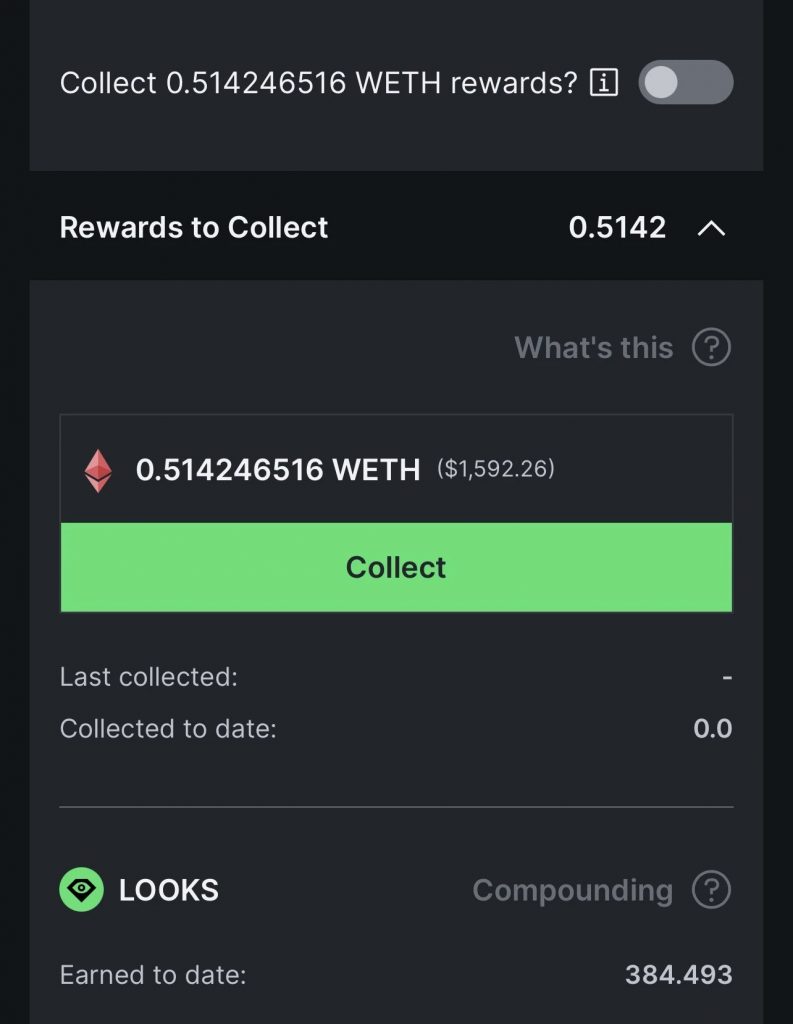 The volume of LooksRare is growing, so the early adopter and stakers of $Looks token will enjoy the greatest advantage. Staker of LOOKS token earns 100% of LooksRare’s trading fees. 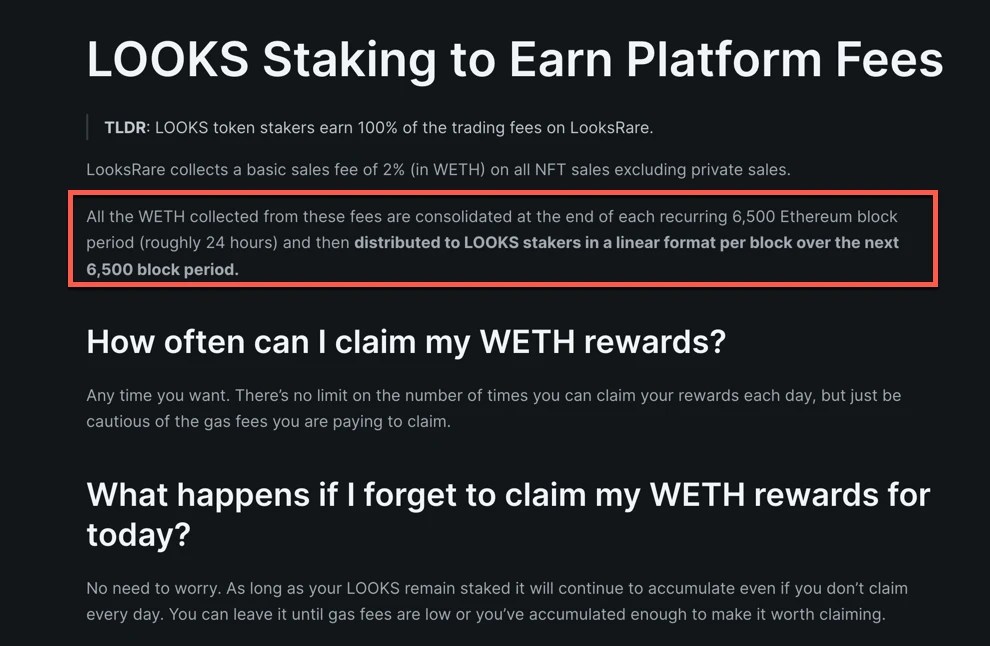 The price action for $Looks token is crazy, and we would have seen more higher price action if not for the recent crash.

Due to its high demand and fair distribution, $Looks token is listed on several top exchanges. The following top crypto exchanges allow you to purchase $Looks token at the moment of writing: 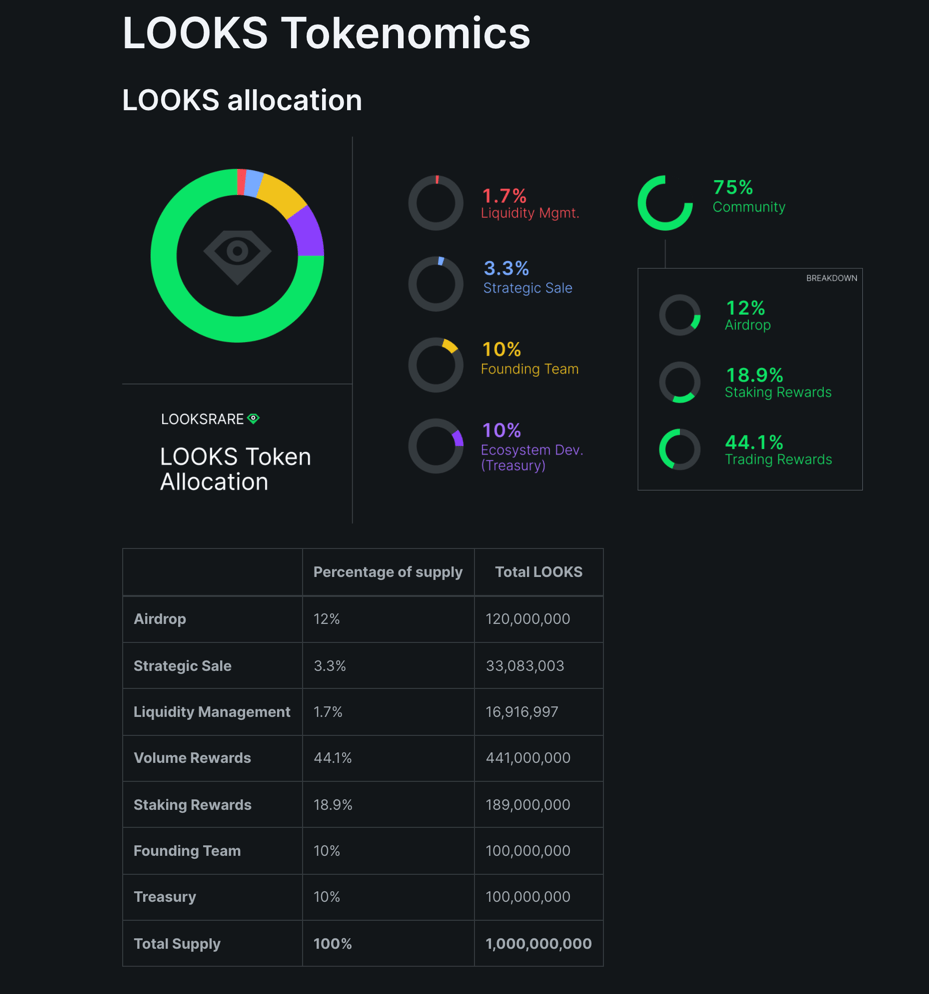 OpenSea’s value is $13 billion and the need for an NFT platform that is community-centric makes LooksRare well-positioned to claim this spot.

The $looks token’s current market cap is $4.3 Billion. (@ Price of 4.32). Looking at the growth of the NFT ecosystem as well as the current OpenSea valuation, it seems that it could easily grow by 2-3x. They must continue to build and work closely with the community. You can also stake your $Looks token here as an investor to receive $Looks staking rewards.

A small update is all that’s needed to make the trending collection and NFT on the homepage visible. This algo generated them:

NFT with the most current on-chain activity

Refreshed every 10 minutes. No paid promotions. You have no choice. pic.twitter.com/0Nrhq4nHkh

– NFT Marketplace (@LooksRareNFT January 26, 2022You asked and we listened.

You can earn trading rewards by selling or buying any NFT on LooksRare starting January 28th, 09:00 UTC.

It also seems to be sharing its fees with community members and the platform, which is what we would expect from a Web3.0-centric platform.

The platform fees are another striking difference between OpenSea & LooksRare.

Platform feesOpenSeaLooksRare2.5%2%Extra incentive in the form of $Looks token

Users are flocking to LooksRare because of the $Looks reward as well as lower platform fees. The $Looks token holders receive the entire 2% of rewards.

OpenSea remains a clear winner in terms of platform interface. To achieve the interface it has, it took years of reengineering and continuous development. LooksRare, on the other hand, is a brand new platform that was launched in the second week of January 2022. The interface is simple, intuitive, but not as good as OpenSea. It was, however, not terrible in my limited experience using LooksRare for NFT buying/selling. OpenSea has more features than LooksRare, and that is something I think LooksRare should take advantage of.

Why Choose OpenSea Over LooksRare

Even though I strongly recommended the LooksRare platform, it would take LooksRare months, if certainly years, to reach OpenSea’s level of service.

OpenSea’s growth could be attributed to organic growth. LooksRare uses the incentive model to attract NFT users. It seems to be working at the moment but they need to keep the momentum going. It could become the #2 or #1 NFT market in the future.

LooksRare faces some challenges with features like the lack of minting and support for more blockchain (Polygon), but for the moment, OpenSea is the leader.

LooksRare has a few collections that are doing well. If you are an NFT trader, investor or trader, LooksRare is the best place to start looking. 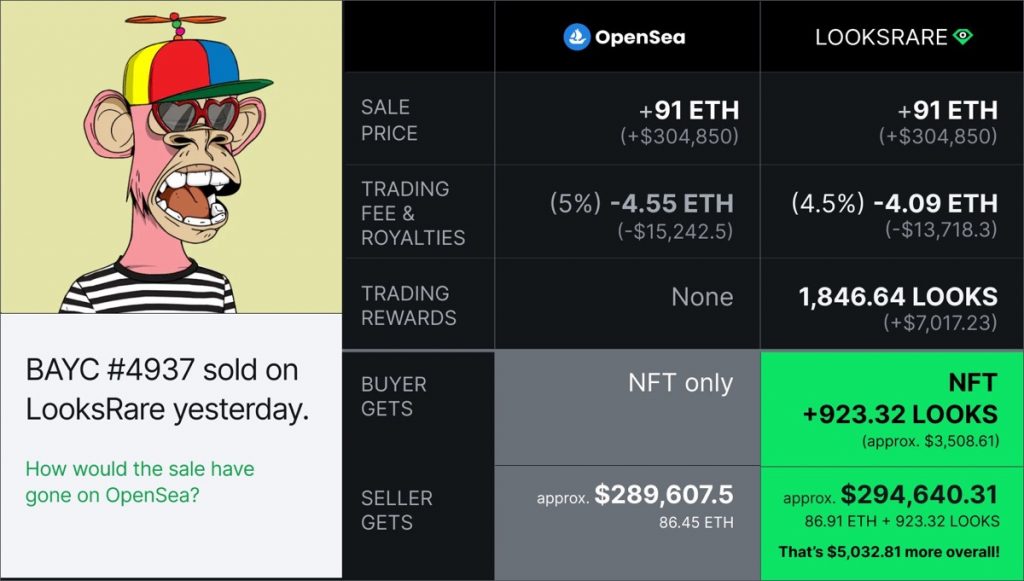 As an industry participant, it was a pleasure to find LooksRare. The community needed an alternative for OpenSea. Monopoly in any industry is bad, and competition such as LooksRare will push OpenSea forward to build faster.

Investors will find the $4.5 price tag for $Looks token attractive. To maximize your investment return, you might consider staking $Looks token. On the most popular exchanges, such as FTX and ByBit, you can purchase $Looks token. You can then withdraw $Looks token from your Metamask wallet to stake it on the LooksRare rewards pages.

What is the price target of the $Looks token

Where can I buy the $Looks token

The $Looks token can be bought on these top exchanges:

What investment risks are associated with Looks token?

Stakeholders who lose faith in this platform, or if the platform fails to up the community sentiment could lead to high selling pressure and sinking of the price. However, LooksRare’s limited existence has shown them to be hitting all the right spots.

OpenSea vs. LooksRare – Which platform should you use?

LooksRare is a better option for NFT scalpers, but OpenSea offers a better volume and better collection. OpenSea is the best option if you are looking to launch your NFT collection. LooksRare has yet to launch this minting feature.

Did you miss our previous article…
https://www.goldcoastmoneyonline.com/bitcoin-technical-analysis/