Just like Kylin Network is poised to bring a cross-chain platform that would power the data economy on Polkadot, it’s canary parachain, Pichiu, would do the same, only sooner–on Kusama.

Initially, Kylin aimed to launch directly on Polkadot, but the growing adoption of Kusama led the team to adjust its course and reconsider managing two parachains, with Kusama used for testing more innovative or experimental data feeding (like uploading your genome, for example!).

In October last year, the team announced it would be securing a slot on the Polkadot’s sister network–leveraging a faster adoption and implementation of Kylin Network and DeData standards.

Aiming to provide the data infrastructure for the future DeFi and Web 3 powered by Kusama, Pichiu began entering the auctions in December last year, on the 18th slot.

In the process, while incorporating the community’s feedback, the team behind Polkadot’s advanced, decentralized data feeding protocol made some adjustments to Pichiu’s initial tokenomics design.

Deeming the initial swapping mechanism unfair, the project opted for airdropping KYL token holders with PCHU instead, and adjusted the total supply–addressing the concern that adding another billion of tokens to the same ecosystem might result in dilution.

Reducing the PCHU token supply to 100 million (10% of the supply of KYL) resulted in the following tokenomics: 30% allocated for the parachain crowdloan fund, 10% for the PLO reserve aimed at future auctions, 9% for community rewards, 5% for lock drop rewards, 6% for the holders reward (1% will airdrop to KYL holders immediately and the rest to be distributed at a 0.5% monthly rate), 20% for the marketing fund, 10% for the liquidity fund, and 10% for the developer fund. Each KSM lent in the Kusama crowdloan will be associated with 350 $PCHU.

“Kylin has completed the querying functionality of the data warehouse–we believe it makes sense now to launch a canary network and test out the integrations with our many partners, both Polkadot based and others. We can only do that in the very near term via Kusama,” explained the team, pointing out the strategic importance of utilizing the Kusama bridge to Ethereum, which would enable integration of Solidity-based partners and allow Kylians to provide data to them.

Thus far unsuccessful in securing a slot on Kusama, Kylians are determined to win a parachain by March.

By March, we will have a $KSM parachain secured. pic.twitter.com/OCtsLqzES3

Bifrost SALP for the Pichiu Crowdloan

Pichiu crowdloan completion and winning the slot on Kusama are on the top of Kylin’s achievement list for this year. 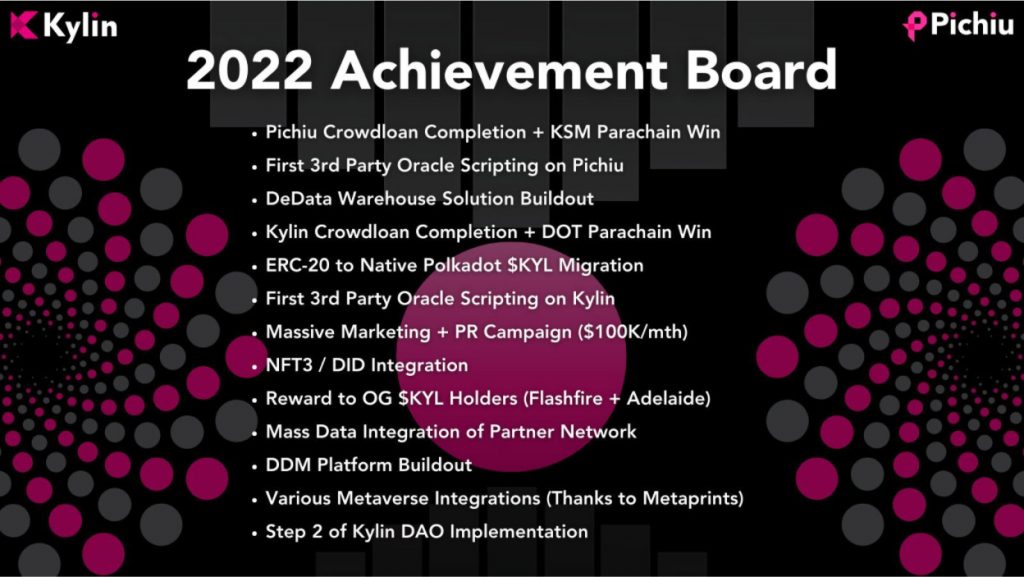 Crowdloans enable teams to crowdsource and bootstrap their Kusama parachain auction–allowing investors and community members to contribute by locking up their KSM tokens until the end of the lease.

While projects can choose to reward their contributors in various ways, they can also opt for different crowdloan structures–hosting it either natively on Kusama or on a third-party platform.

This is where Bifrost enters the picture as a powerful ally, given that a successful Pichiu crowdloan is the last step for Kylin’s canary testnet to go live.

Last month, the Polkadot ecosystem DeFi protocol announced its support for the Pichiu crowdloan, and implemented a cross-chain between Kusama parachain and relay-chain for the Slot Auction Liquidity Protocol (SALP).

Through minting fully decentralized liquid derivatives based on the Kusama parachain, Bifrost unlocks numerous use cases for contributors participating in the Pichiu crowdloan–from derivative farming and liquidity mining to swaps, including cross-chain token swaps.

Kylin’s Network canary parachain Pichiu is gearing up to secure its slot on Kusama CryptoSlate.

Mystery shopping: Become a mystery shopper and get paid to shop and eat out

Get Paid to Walk

Get Paid to Walk

KashKick Review. Is it Legit? A Safe Way to Earn Extra Cash?