New protocols are constantly coming online in DeFi, with protocols using stablecoins being the most common. There are currently over 70 stablecoins in circulation, but no protocol supports all stablecoins.

Because anchoring the same asset in different protocols can appear as different tokens, users often need to swap between these tokens. mStable is built to solve this problem.

mStable is an Ethereum-based stablecoin aggregation protocol, minting a basket of underlying assets, bAsset (Basket Asset, e.g. USDT, DAI), into mAsset (e.g. mUSD, mBTC) with certain weighting through smart contracts. Currently the meta-assets that can be minted are mUSD anchored by USD and mBTC anchored by BTC.

mStable is designed to solve the following 3 problems.

Significant fragmentation when anchoring the same asset and poor user experience. mStable wants to solve the problem of using the same-peg assets in different protocols but constantly swapping between them.Lack of yield for assets. Increase user revenue through the Save feature and stake for additional MTA rewards or other platform token rewards.Lack of protection against permanent loss of pegged assets. In comparison to a single stablecoin, mUSD is made up of multiple stablecoins, which spreads out the losses caused by extreme risks in a single stablecoin. mTA also activates a protection mechanism to re-anchor the USD in the event of a de-anchoring.

mStable provides a one-stop solution to the above problems through 3 sections: Save, Pools and Swap.

Users can earn interest when depositing mUSD or mBTC. The APY on stablecoins in the last 90 days has been as high as 44% down to 4%.

The source of interest is earned through lending protocols such as Compound or Aave, as well as fees for users to redeem and swap on the platform.

Users can save mUSD with 10 different tokens (including direct deposit to mUSD, or to USDC, DAI, FEI, ETH, etc.), and similarly for mBTC with 7 tokens.

Users can deposit non-mAsset assets then the protocol can directly mint them or swap them for mUSD/mBTC. Upon deposit the user will receive imUSD/imBTC, or the user can deposit assets directly into the Vault to receive the protocol’s token reward MTA.

Users provide liquidity to the pool of mStable to earn swap fees. Direct deposits into the Vault also earn MTA rewards, with one-third of the MTA available immediately and the remaining two-thirds are streamed linearly after 26 weeks.

Liquidity providers can boost earnings up to 3x by staking MTA.  Current reward APY is up to 41.3%, but most pools have less than $3 million in liquidity.

Since both assets of the mStable pool’s pairs are anchored to USD stablecoins or BTC, making the pool is essentially immune to the risk of impermanent loss.

In Swap, users can quickly swap, mint or redeem mAssets directly between tokens anchored to the same asset.

mStable supports direct minting to mUSD for 4 assets (sUSD, DAI, USDC and USDT), and to mBTC for 3 assets (WBTC, renBTC, sBTC), with minting and redemption prices predetermined by a formula. The price takes into account the weight of the asset in the basket, the lower the weight the more mAssets are minted, this setting gives the user the opportunity to arbitrage. 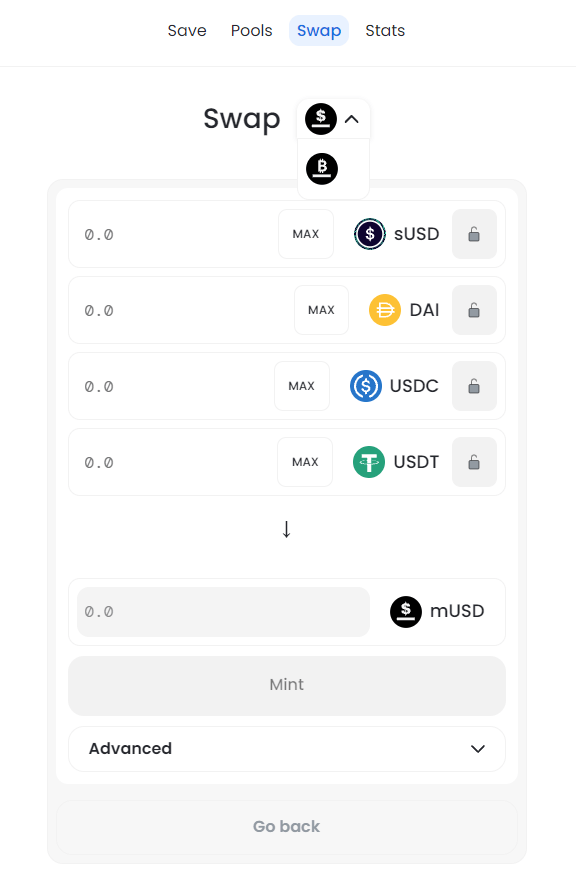 According to Footprint Analytics, mUSD’s price experienced several slight de-anchors in the second half of 2021, while its underlying bAsset’s price volatility was largely stable. It is clear that mUSD is less stable than other popular stablecoins, and its price gradually stabilized after December.

mUSD’s market cap is in line with the climb of mStable TVL in October, currently minted at $90 million. However, TVL and mUSD’s market cap have fallen back as the platform’s APY has declined.

The MTA acts as a governance token for mStable and has 3 functions.

In order to drive more users to mint the mAsset and provide liquidity, 20% of the MTA is used to reward contributors in the early stages.

Users who stake MTA can participate in the governance of the platform and have the right to vote about the platform including parameters such as redemption fees, reward distribution, bAsset composition and weighting.

Provides a protection mechanism for the mAsset to maintain a stable anchor. When a deviation from the anchor occurs that is under-collateralized, the platform removes the de-anchored asset. mStable will sell the MTA to purchase the mAsset, then burn it to make mAsset fully collateralized. This is similar to the role of MKR in MakerDAO in the event of a collateral shortfall.

Users aim to get higher yields in a simple way. Is it redundant to mint a new stablecoin in mStable by spending gas fees for a stablecoin already held, or is it a progress of stablecoin application?

There are three aspects for mStable to consider:

In terms of security and stability, mUSD prices are clearly more volatile than its bAssets. mUSD is still exposed to the centralization issues as the underlying bAsset are mostly centralized stablecoins. Since the stability of algorithmic stablecoins is much less than centralized and over-collateralized stablecoins, the risk of de-anchoring may be greater if algorithmic stablecoins are added.In terms of convenience, mUSD is still missing from many popular protocols and is not yet achieving its original intent in utility.In terms of depth of pools, mStable has created two pools on Balancer, USDC/mUSD and WETH/mUSD, which became the first and fifth largest pools in 2020 through double token rewards. But with decreasing rewards, the depth of mStable’s pool is shrinking.

With the development of DeFi, it is believed that the situation of stablecoins will be dominated by a powerful one or aggregated stablecoins. mStable has discovered the pain points of users in advance, although it still seems to be a long way to go, the future will be promising if it keeps going.

Footprint Analytics is an all-in-one analysis platform to visualize blockchain data and discover insights. It cleans and integrates on-chain data so users of any experience level can quickly start researching tokens, projects and protocols. With over a thousand dashboard templates plus a drag-and-drop interface, anyone can build their own customized charts in minutes. Uncover blockchain data and invest smarter with Footprint.

The Different Types of Gold: An Investor’s Guide

Poshmark – Is Poshmark legal for selling and buying used clothes?