Brantley Millegan was the former Director of Operations and DAO Steward at the ENS DAO. He posted a tweet in 2016 expressing controversial views on topics such as HBTQ persons and transgenderism.

Millegan is a Catholic member and his Twitter bio says “Catholic, husband and father”. He has not expressed any regrets about the resurfaced tweet from five years ago, a position that has upset many in the Ethereum Name Services (ENS) community as well as others. 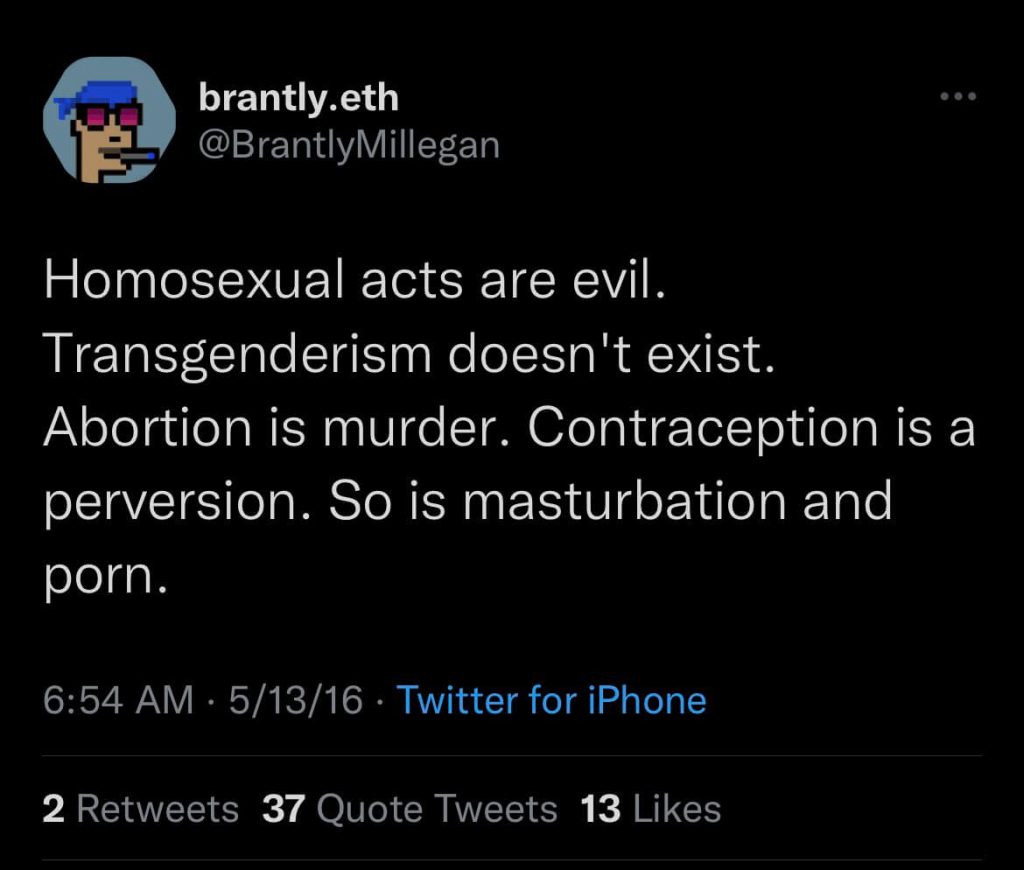 Members of a disillusioned community

Marcus Martinez, a member of the community, expressed his dismay at Millegan’s solid position in the matter in the ENS DAO forum.

“Brantly.eth had the opportunity to redeem itself on Twitter’s public discourse yesterday night. Instead, he chose to amplify his snarky rhetoric. This is an abuse of power and doesn’t reflect the values, beliefs, and views of the ENS Community. […] If he continues in his current position, it will jeopardize the Community’s mission of inclusion and negatively impact the reputation of the entire organization.

Soon after, ENS Support Lead “validator.eth”, announced in the same forum thread, that Millegan was being removed from his position as Community Steward. The ENS DAO community delegates voted on Sunday to remove Millegan. A large majority voted in favor of Millegan’s removal, but some delegates remarked about the dangers associated with ‘Cancel Culture’ as well as the irony that a decentralized service is centered around one voice.

“After carefully listening to the concerns and delegates of the stewards and other community members, it was in the best interests of ENS to remove Brantly as a Community Steward. […] I believe web3 and the Ethereum community are spaces for inclusion, kindness, and respect. I hope we can all work together to achieve these shared values.”

Millegan’s position with TNL is “no longer tenable.”

A few hours later Nick Johnson, Lead Developer at ENS, announced that Millegan had been removed from the Director of Operations position at True Names Limited, (TNL), a UK-based nonprofit that funds and organizes ENS development.

Today, Brantly Millegan’s contract with True Names Limited (TNL), a nonprofit that funds and organises development on @ensdomains has been terminated. Brantly was a valuable member of TNL’s team for the last three years. We felt, however, that Brantly’s position with TNL was no longer sustainable.”

“Many of your feelings were hurt by Brantly’s comments over the last 24 hours. We strongly believe that ENS should remain an inclusive community. Johnson stated in a tweet that “We’ll continue doing everything we can to make sure that this remains the case going forward.”

Johnson announced that Millegan would remain a director at the ENS Foundation, a real-world entity that represents DAO. Johnson recommends Millegan remain in this position until a successor is appointed and voted in by ENS DAO.

Millegan’s Twitter account appeared to be suspended for a time, but it is now back in operation at the time of writing. However, the original tweet was removed.

Millegan’s opinion has been strongly criticised by many, but others have shown support for him. Millegan doesn’t seem to regret his five-year-old tweet. He posted on Discord to reaffirm his beliefs and stated that he was open to being friends and working with many people. He said that Web should be open to all religions, including traditional Christians, Muslims, and Jews.

Adam Cochran was a crypto analyst and General Partner of Cinneamhain Ventures. He tried to hit Millegan using the Bible.

You may have missed some sections, such as the ones about loving others.

Or, you can follow the example of Ephesians 4/29, which says not to speak unwholesomely

There is a huge difference between denouncing and faith.

Millegan replied that his position was “mainstream traditional Christian positions” and not fringe.

“hey, not really in debating about the theology right at the moment, but what I believe are the main traditional Christian positions held the largest religion in the world. It’s not fringe,” Millegan responds.

The market side of the story saw the ENS token take a slight hit over the weekend. However, it is difficult to determine if this was due to the Millegan scandal or general market movements. The ENS token traded at $20.5 on Monday, slightly higher than the previous week.

The ENS service converts crypto wallet addresses that are difficult to remember into human-readable names like cryptoslate.eth. NFT tokens can be traded on open market if ENS names are themselves NFT tokens.

Did you miss our previous article…
https://www.goldcoastmoneyonline.com/interchain-security-what-is-it-and-why-is-it-so-important-for-the-cosmosatom-ecosystem/

Instant Cash for Gold at Attica

Avoid Making This Mistake With Silver and Gold in IRAs