Bitcoin pulls out the UNO reverse card on gold

Since then, $BTC has been trading in a tight range between $37,800 and $39,000. But, with the Relative Strength Index (RSI) beginning to curl downwards, it appears as though momentum is waning for now.

In contrast, the reverse situation played out for gold. It peaked at $1,975/oz before bottoming at $1,880/oz, giving up all of Thursday’s gains.

Ingles commented that risk appetite has returned, despite the ongoing uncertainty in Eastern Europe, as evidenced by stocks closing higher on Thursday. 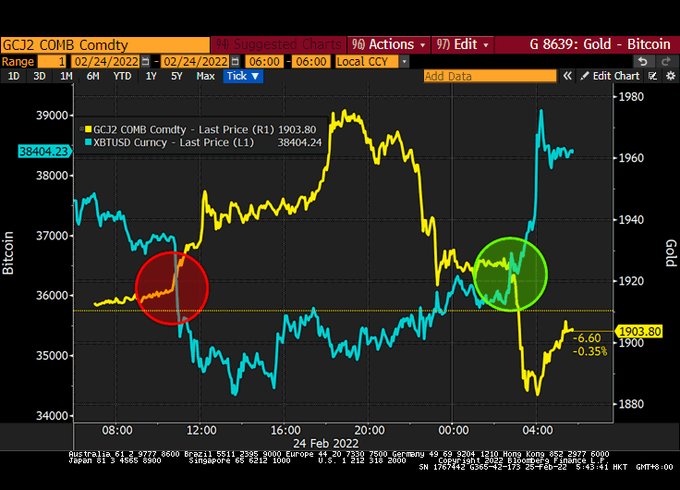 Twitter user @ceterispar1bus chipped in with a more cutting response, saying while yesterday’s events set off a significant pump for gold, given the gravity of the situation, it wasn’t something to be celebrated.

Signing off, he said he doesn’t see the fascination with gold as an investment, considering its inability to hold onto those gains.

“gold investors got their one idiosyncratic rally in a decade that was ~4% during a humanitarian crisis where you couldn’t even enjoy it unless you’re just a piece of shit only to retrace the whole move in less than 24h. just don’t know how people see the appeal of it anymore.“

Is Bitcoin a safe haven or not?

Thursday’s sell-off provided further evidence that Bitcoin is a risk-on asset, contrary to the aspirations of its founder. Another example was the covid drawdown in March 2020, which saw a near 60% loss over seven days.

Simon Moore, ex-Chief Investment Officer at Moola and FutureAdvisor, attributes this response to the different types of $BTC investors. During times of panic, speculators dominate price action and a more willing to exit their position. Whereas, if long-term holders had the upper hand, Bitcoin would display a more stable response to chaotic events.

“it’s not surprising that speculators would sell at times of market stress. On the other hand, if it were owned by long-term investors, then pricing might be more stable when the market is under duress.”

Moore concludes that Bitcoin’s investor base may evolve over time, leading to maturation as a safe haven asset. But for now, it cannot be considered a flight to safety.

Bitcoin pulls out the UNO reverse card on gold CryptoSlate.

Recommendations for selling gold on the online

Which are the Top Places to Find Gold Buyers Reliable?