Axie Infinity is the most popular Play-to-Earn title, and it’s experiencing a revival. It suffered a $600 million hack in March that caused a collapse of user engagement. Recent improvements to the game’s ecosystem and gameplay have seen its NFT sales rise by 205%. Strong user engagement and downloads have also increased.

What is Axie Infinity?

Axie infinity, an Ethereum-based game-to-earn platform, was launched March 2018. The game features an amazing collection of collectible creatures and a unique universe. You will be able to collect, breed, battle, and build kingdoms for your “Axies”. You can also trade, buy, and trade resources in the game’s economy.

Learn more: Move to Earn or Play to Earn

Its integration with Ethereum blockchain is what sets it apart from other similar games. You can now own the Axies that you have collected as virtual assets through this integration. This game rewards players who put in the effort and time to improve their skills.

The game is entirely player-driven and owned by the players. Players can access all art assets and data to create their own experiences in the game. Active users rank Axie Infinity as the top Ethereum-based game.

Axie Infinity’s expanding universe includes land staking as the next step. Since land plots became available in the game, they have been a way to offer more rewards and experiences. Landowners can now stake their land to earn rewards in form of Axie Infinity token (AXS).

These are just the beginning of many more features. Axie plans to continue adding gameplay-centric rewards to the game in the future. This will increase the interaction between users and the game.

Axie Infinity currently has 337,500 AXS per Month as staking rewards. The game has five land types, each with a different reward rate. 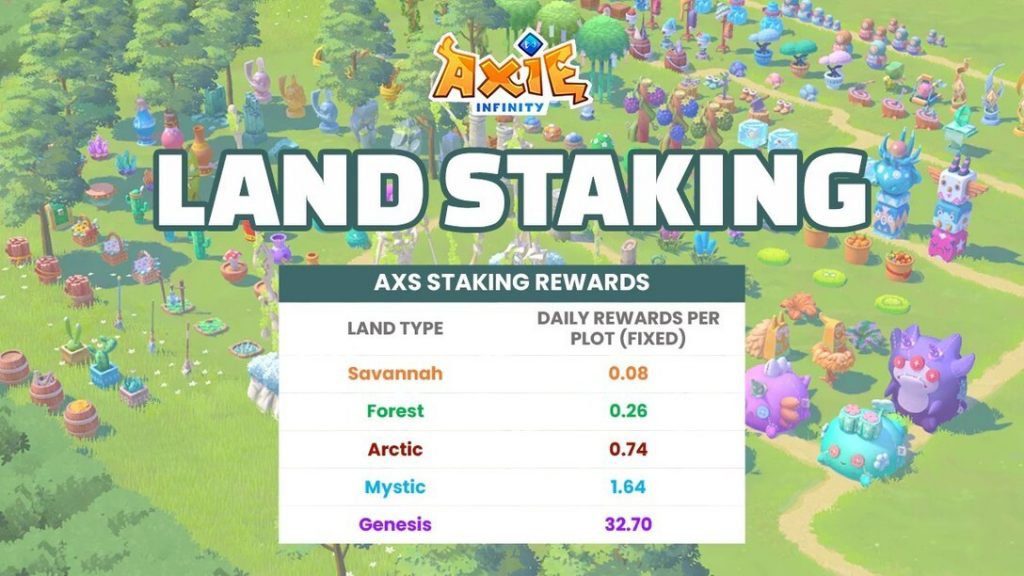 The Ronin bridge, an Ethereum sidechain designed for the game, is called Ethereum sidechain. It allows users to transfer assets between the game’s main Ethereum network and their own. This sidechain was victim to a hack in March that saw it lose over $600,000,000 worth of tokens.

Sky Mavis, the company behind Axie Infinity, has reimbursed its users with 25.5 million USDC and 117,600 Ethereum to repair the damage done by the hack. After three rounds of audits, the Ronin bridge has been restored to online status.

The main change in the bridge design is the updating of smart contract limit limits. This allows validators and sign-off systems to approve withdrawals.

All withdrawals below $1 million are covered in Tier 1. To sign off, 70% of validators must be present. Tier 2 applies to amounts over $1 million. It requires 90% of validators sign off. Tier 3 is for amounts exceeding $10 million. You will need to sign off 90% of the validators, as well as a transaction fee and a seven-day holding period.

Two primary tokens are used in the game: AXS (or SLP)

Axie Infinity Shards, (AXS),: This governance token is used by Axie universe. AXS can be earned via gameplay or staking. It allows players vote and to participate in key governance decisions. AXS allows the creation of the community treasurey, which serves as the game’s reward pool. Inflows from all Axie NFT Marketplace trades and the AXS used for breeding Axies are sent to the treasury.

Smooth Love Potion: The utility token for the Axie universe is SLP. This token is used to breed your Axies and AXS. You can earn SLP by playing in an arena against other players.

Axie Infinity is still the most played Ethereum game. It was hit hard by a hack to its sidechain. But it has rebounded remarkably well. Sky Mavis’ strong commitment to Axie’s future and the ecosystem shows in the reimbursement of lost funds as well as changes to the system. Recent developments suggest that Axie may return to its popularity days.

Visit ZebPay to learn more. Get the most recent updates on Crypto by signing up for our newsletter

44 Best Proofreading Jobs You Can Do From Your Home (Updated For 2022).

How to make Excel spreadsheets for a living: 8 Side hustles