Despite the growing fears of an economic slowdown, the crypto market posted good gains on Friday. The US Federal Reserve raised interest rates by 0.75 basis points to stop inflationary pressures that could affect global sentiments. Today, all major tokens including ETH and BTC are trading green. XRP appears to be the leader of this relief rally, with 29% gains, while Ether, Cardano and Doge have risen more than 7%. Global crypto market capitalization reached a record high of $953.6 billion, an increase of around 5% over the last 24 hours. However, the total volume of trading has dropped by 16% to $77.88 billion.

Bitcoin is however struggling to recover $20,000 as a hedge against an increase in interest rates. The correlation of Bitcoin with US equity also suggests a further decline in 2022. The market bottom is near, according to a Bitcoin on-chain indicator. It tracks how much of the coin supply long-term holders (LTHs) are holding at loss. About 30% of Bitcoin LTHs suffered losses on September 22nd, as BTC fell from $69,000 in November 2021 down to $19,000 now. This is about 3 to 5% less than the previous level that coincided with Bitcoin’s bottoms. Data shows that the number of addresses has increased steadily during the bear market. This metric tracks addresses that have at least two incoming transfers without dust (Dust refers a lower amount than is necessary for a transaction and have never spent any money). It also shows steady user growth during a bear market.

Ether (ETH), also saw a 17.3% retrace over the seven-day duration. Many altcoins saw worse. Some of the worst weekly performers were affected by the Ethereum Merge and its subsequent effect on different GPU-mineable money. According to CoinShares’ weekly report, Ethereum funds experienced $15.4 million in capital outflows during the week ending September 16. Bitcoin-based mutual funds, however, attracted $17.4million in the same week. This indicates post-merger capital migration. Extreme selling pressure was also experienced by the Proof-of-Work (PoW), who sold $40 million worth Ether in the days preceding the PoS upgrade.

The Federal Reserve raised rates by 75 basis point on Sept. 21. Fed Chair Jerome Powell predicted a further 125 basis point increase before the year’s end. The United States Dollar Index, which measures the strength of the dollar against a basket major foreign currencies (DXY), rose to 111.57 on September 21st for the first time since 20 years. A “dot plot”, which shows the Federal Reserve’s individual interest rate forecasts for 2025, was also published by the Federal Reserve. It will raise the benchmark rate to 4.4% before the end of 2019, which is a sharp increase from the June estimates of 3.8%. In addition, the Fed indicated that rate cuts will not be considered until 2024. The 2-year Treasury rose to 4.1% due to higher rates, the highest level since 2007. Investors who seek safety in uncertain macro environments could be attracted by this rate. Higher rates may also reduce the appeal for risky assets like stocks and cryptos, and could delay the beginning of a new uptrend.

After facing stiff resistance at $22,500, BITCOIN saw a sharp correction on the 13th September 2022. It broke the support of $20.740 and 20-Day Moving Average. The asset was consolidated between $19500 and $20,000. The price action was on the downside. They are now trading below the range that made the low of $18,125. However, the bears failed to break the $17.622 key support and prices reversed from $18k. Bitcoin is strong against $20,750 resistance and $22,500. BTC must break above and close below these resistance levels to witness a rally. $17,500 will serve as strong support. Further decline can be triggered if the support is breached. 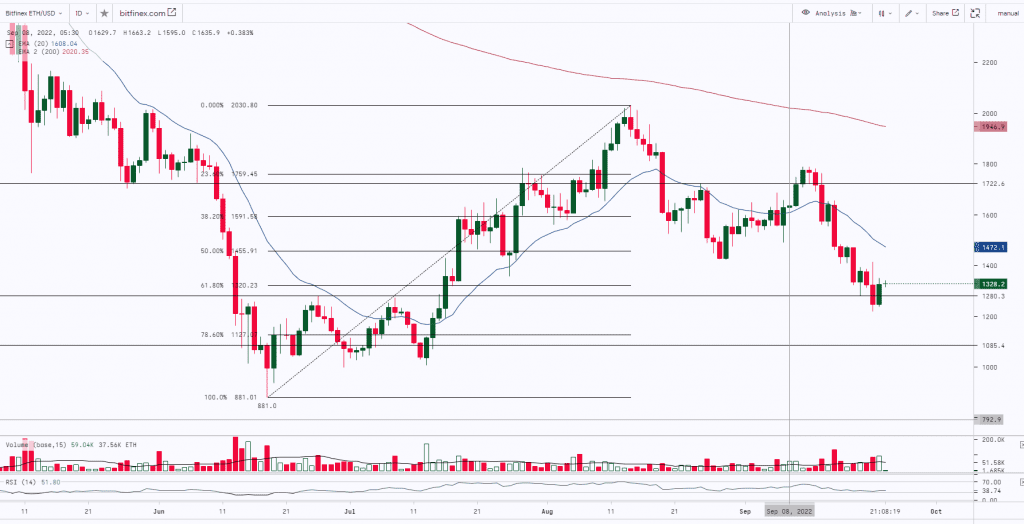 ETH rallied to $1,789 after making a bullish Engulfing pattern at $1.422 on 29th August. The prices were then faced with stiff resistance at $1750 (23.6% Fibonacci retracement level) and experienced a sharp correction. The weekly low of $1,220.1 was reached by the asset which fell nearly 31%. ETH is trying take support at $1,250. If prices remain above this support, then the bulls can resume their up-move. A break below the support will result in further decline.

BNB, which fell to $258.6 at 7 September, showed signs of recovery and rallied to $300. The psychological resistance was strong and BNB prices dropped to $258.6 on September 7. BNB is currently consolidating and trading between $260 and $280. The trend will be further determined by breakouts that occur on either side of this range and good volumes.

Taki, a Web 3.0 social networking platform, was launched on the Google Play Store. Its active user base has now surpassed half a million. With a user base of 559.705, over 468.541 unique user coins generated to date, Kraken has confirmed that Jesse Powell, co-founder of cryptocurrency exchange Kraken, will step down as CEO. The Wall Street Journal reported the news first. Compute North, a bitcoin (BTC) mining company, filed for bankruptcy. This comes amid increasing pressure on the company due to crypto winter and rising energy prices. Dave Perrill, the firm’s CEO, has also resigned but will continue to serve on the board. WazirX, an Indian-based exchange, will implement BUSD auto conversion for balances USDC, USDP, and TUSD at a 1:1 ratio starting October.

Disclaimer: This report should not be regarded as investment advice. It does not consider the financial situation or investment goals of investors. When deciding whether an investment is right for them, all investors should take into account these factors and consult with a professional advisor. This report was prepared by the Company using information that it has access to, as well as information from public sources that have not been independently verified. The Company makes no representations or warranties, either express or implied, regarding the accuracy, reliability, correctness or completeness of the information, opinions or conclusions contained herein. This report is preliminary. The Company does not assume any obligation to revise or update the reports in response to new events or circumstances after the date of the report was made. Trading & Investments in cryptos viz. Bitcoin Cash, Ethereum, and other cryptos are highly speculative investments that are subject to market risk. The Author’s analysis should be used only as information and should not be considered investment advice.

Did you miss our previous article…
https://www.goldcoastmoneyonline.com/what-is-eos/

Loyalty Cards: The Goods, The Bad, and The Ugly

Loyalty Cards: The Goods, The Bad, and The Ugly

Jed McCaleb will sell XRP shares by July 16th, according to Ripple cofounder.

18 Legit and Flexible Jobs for Teens